SKS Sculpture on Display at Saunders Farm for the 5th Year

SKS Sculpture on Display at Saunders Farm for the 5th Year

Members of The Storm King School Builder’s Club, a popular extracurricular club for young builders and sculptors, meet after school each winter in search of their next inspiration. Their mission: create an outdoor art installation that represents both themselves and the School. This year, their theme reflected abstracts and nature. Their colorful sculpture, called The Animal Farm Redux, resembles a large Rubix Cube depicting George Orwell’s infamous book Animal Farm. The finished piece could be seen stationed in front of Ogden Hall earlier this year before it traveled to the fields of Saunders Farm for the Collaborative Concepts Exhibition. 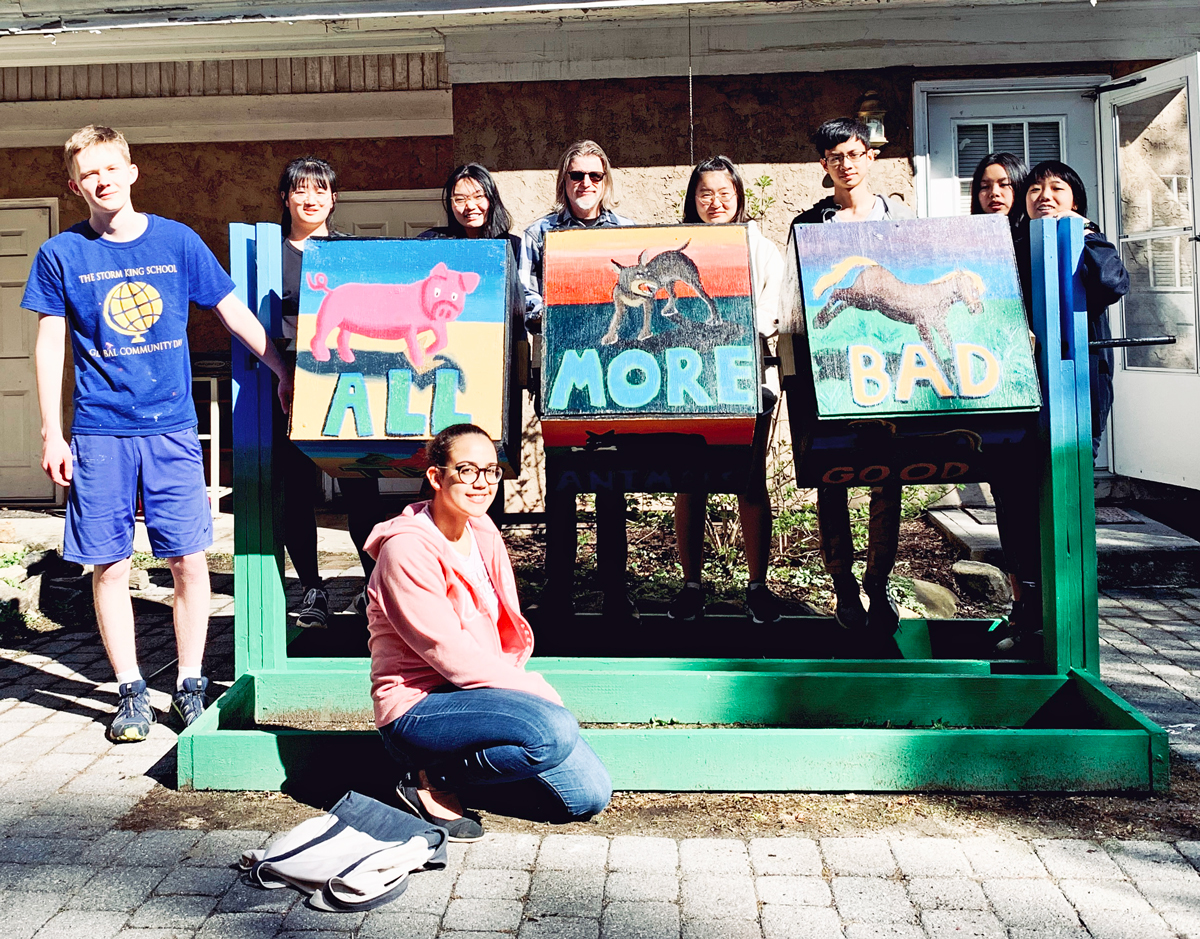 Saunders Farm, a 140-acre organic cow farm located in Garrison, NY, has provided space for Collaborative Concepts’ exhibits for more than a decade. Storm King was invited for the fifth year in a row in 2019 as the only entry representing student artwork among 40 adult artists. The exhibition opened on August 31 and will continue through October 26. 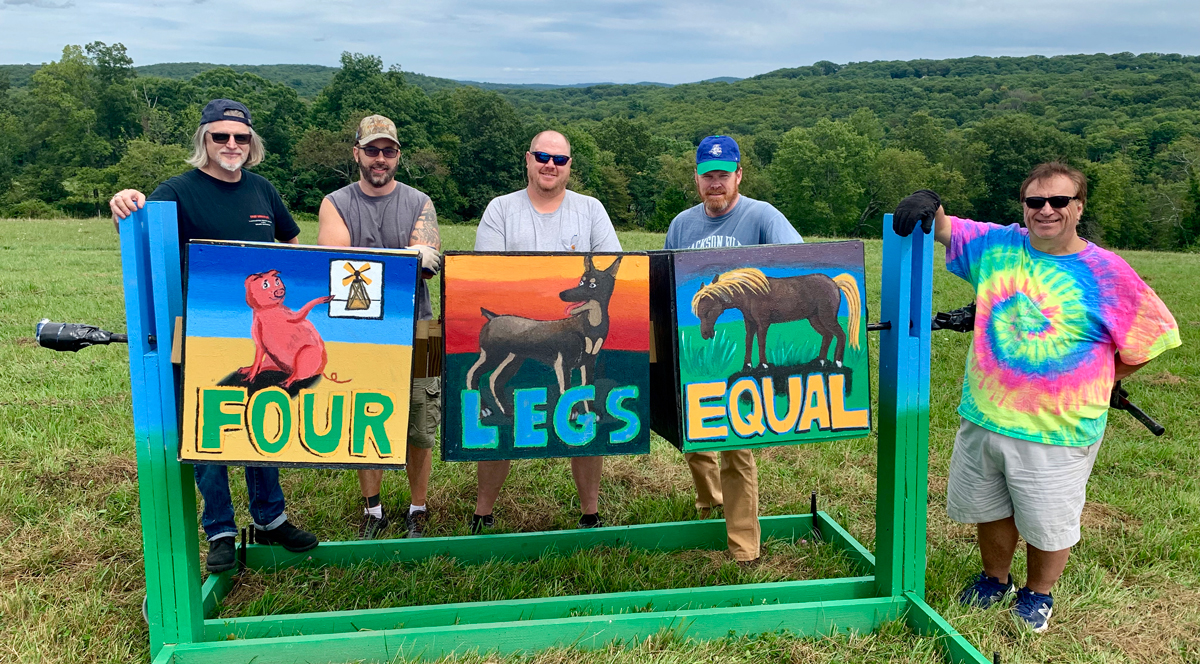 According to SKS’ Visual Arts Department Chair Mr. John Carruthers, available materials play an important role in inspiring each year’s work. “This year’s sculpture is made from plywood and lumber. The idea was to portray the conflicting messages of equality vs. inequality, using the animal kingdom much as Orwell did in his infamous book.  The rotating blocks feature colorful, somewhat surreal paintings of three different animals done by the students – a pig, a dog, and a horse. Dorothy Mao (’20) took on the role of art director and made sure all the images had a similar style. The students decided to change the catch phrasing from the book into three words. For the turning mechanism, similar to a rung on a giant foosball table, we used a long piece of steel tubing. Miles Lucas (’21) was the engineering brain behind the sculpture. He helped us figure out ways to stabilize the blocks so they turn uniformly,” he explained.

Several students and faculty attended the exhibition’s mid-term opening reception on September 21 and reported that Storm King’s sculpture was attracting a lot of attention from visitors and the resident cows alike. 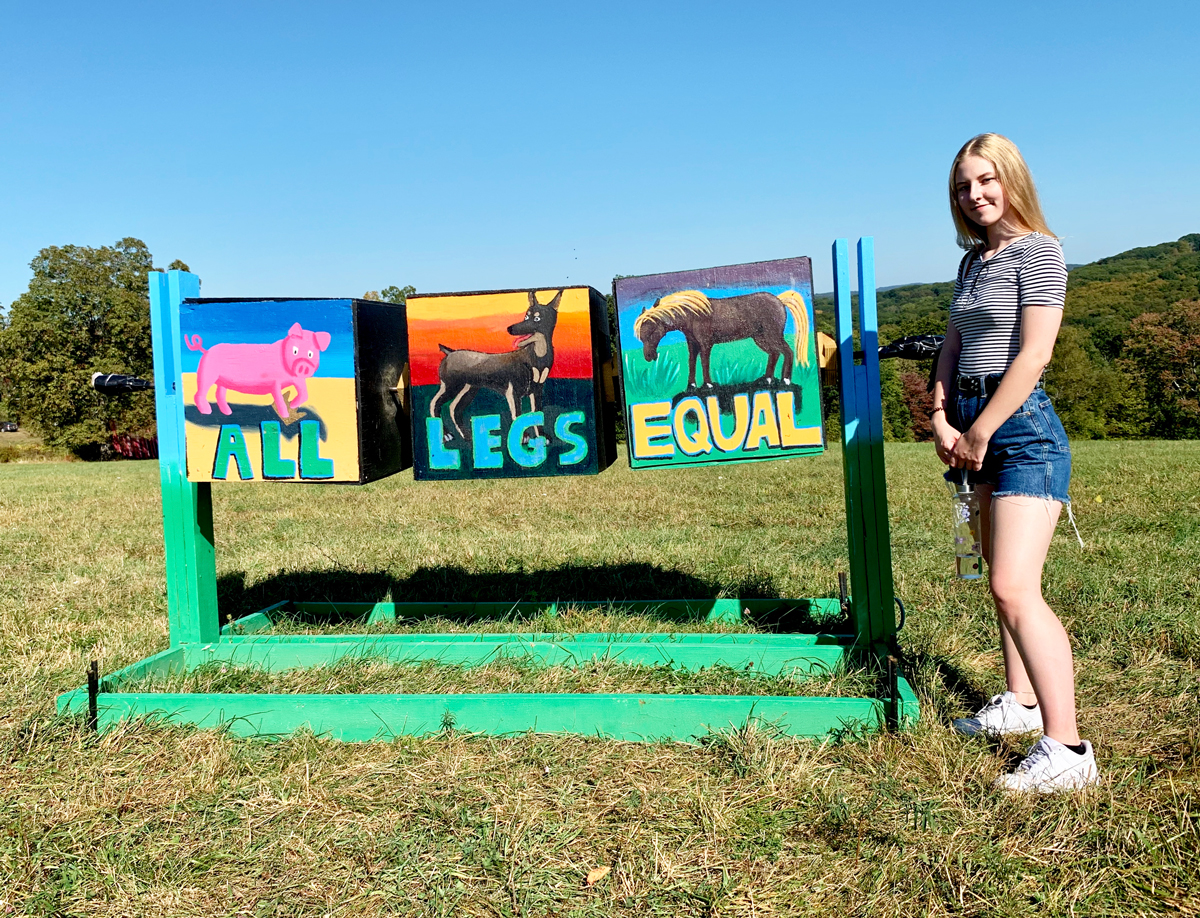