Spring was in the air and art took over the Mountain when our students showed off their talents during The Storm King School’s annual Spring Arts Weekend. This year, Spring Arts Weekend took place on Thursday, April 25 through Sunday, April 28, and featured a series of exciting events on campus. Arts Weekend is organized by the Department of Visual and Performing Arts in collaboration with the English Department to celebrate various branches of the visual, performing, and language arts and showcase the work of our student-artists each year. 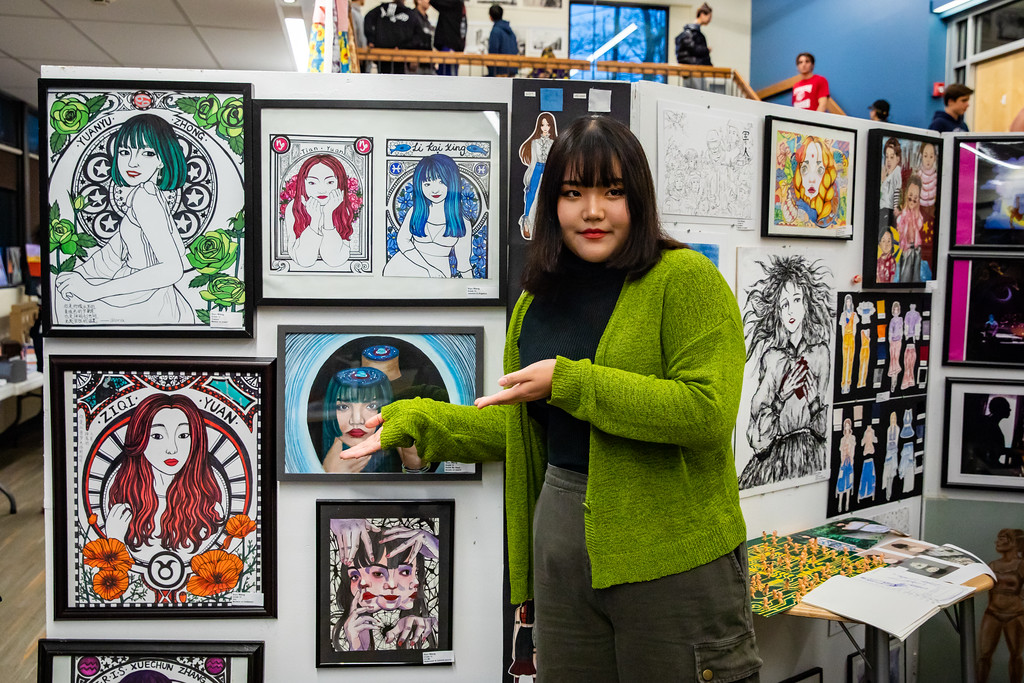 Arts Weekend was kicked off on the evening of Thursday, April 25, in the Walter Reade Jr. Theatre with the premiere screening of this year’s much-awaited student film. Will Heaven Wait?–which was conceived, written, produced, and edited by SKS’ video production students–portrays a father who has an unfortunate accident and faces death head-on before getting a second chance at life. The cast features many SKS faculty members and students, including Mr. Hecht, Mr. and Mrs. Mendlewski, Emily Elizabeth Kent ’21, Conall Sweeney ’20, and Nina Gannon ’23 who starred in the film’s leading roles.

According to SKS’ Director of Video Production Zhenya Kiperman, his students worked hard on the film for most of the school year. “The students wrote the script in class during the fall semester, and later dedicated the film to Warren Beatty– an Oscar-winning actor who starred in the box office hit Heaven Can Wait in the late ‘70s. Our film is not a remake of Heaven Can Wait, but the two films have very similar themes,” he explained. The footage for Will Heaven Wait? was shot during the fall semester, and the post-production continued throughout the year with editing headed by Maya Nazarkasimova ’19, Matthew Pelton ’19, and Catherine Zheng ’19 and audio effects led by Kylie Marshall ‘21. In addition, alumnus Timur Menadzhiev ’17 contributed to the visual effects. 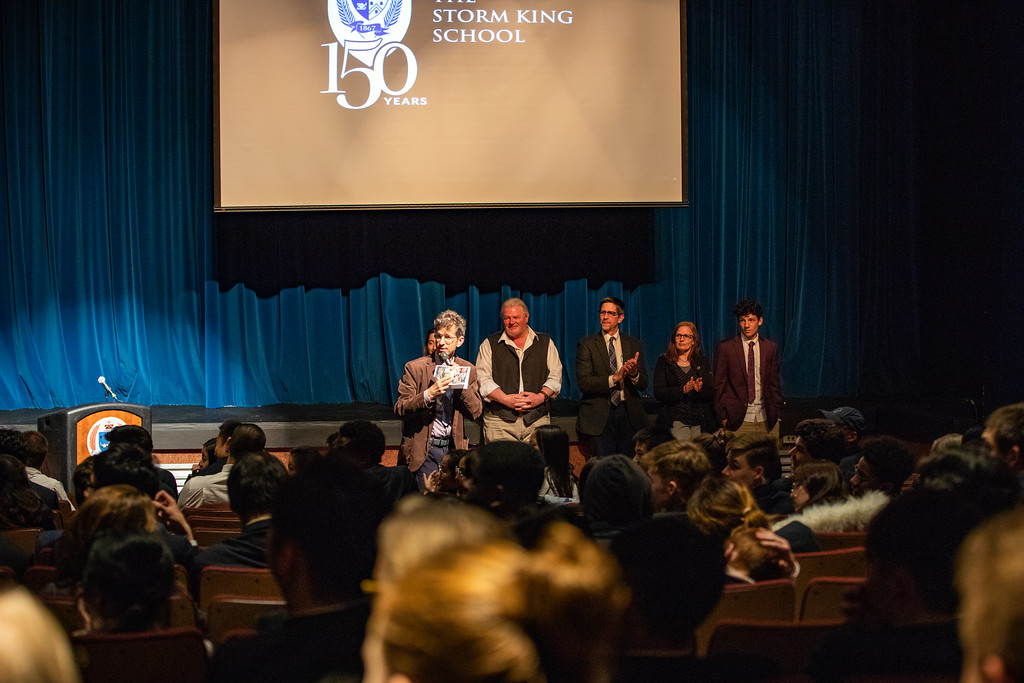 Cast and crew of Will Heaven Wait? answer questions from the audience after the screening

On the evening of Friday, April 26, the focus turned to the visual arts at the Student Art Show and arts awards presentation held in Ogden Hall. Students from all art classes offered at SKS displayed their works, and each category had a winner judged by a panel of SKS faculty members. The show was attended by students, faculty, parents, and other members of the school community who had the opportunity to see a year’s worth of student work. Some of the student-artists also had their sketchbooks and examples of their childhood artwork on display.

Visual and Performing Arts Department Chair John Carruthers announced the art award recipients during the art show, which included Gloria Wang ’19 in the Drawing category; Max Chen ’19 in Painting; Zoe Stene ’19 in Digital Design; and Rocky Yang ‘19 in Mixed Media. Dorothy Mao ‘20 won the Most Creative Award and Tiana Vazquez ’19 was awarded the Best in Show. 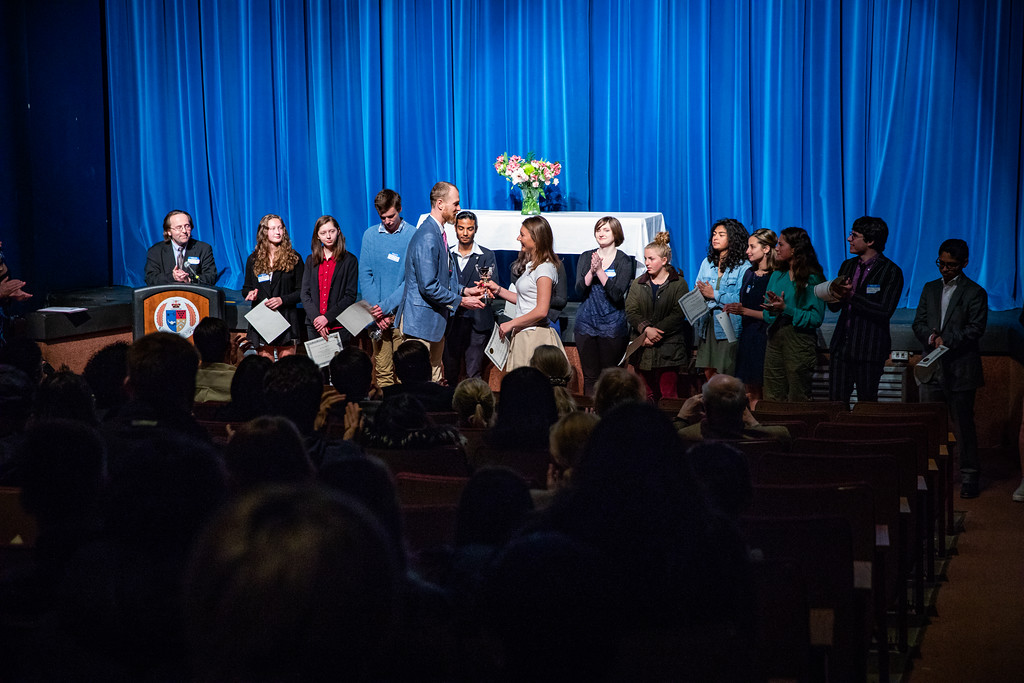 To kick off the evening, SKS seniors Asia Raacke and Caroline Hecht sang the School’s alma mater before Headmaster Jonathan Lamb said a few opening words. Following short videos called What Poetry Can Do and I Hear America Singing; I Too Sing America directed by Guy-Paul Delisfort ’20, the English Department Chair Jeremy Freeman welcomed the participants, as well as the judges–Orange County Poet Laureate Robert Milby and Gloria Winter–who took turns reading the poems and giving each finalist feedback. A new addition to the Festival this year, SKS senior Jilong David Ma performed his original song “Live in the World” for the audience.

At the conclusion of the ceremony, awards were given to three finalists including Storm King’s Maria Nowosielska ‘20 for her poem “A City That Never Sleeps,” The Masters School’s Carter Myers-Brown for “Last Dance to the Shadows,” and Rye Country Day School’s Margaret Dunn for “Binding Iron.” Mr. Ben Chase was presented with the Excellence in Education Award for his outstanding contributions at the Christian Heritage School and for “his continued commitment to poetry and the arts.”

The final event of 2019 Spring Arts Weekend took place on Sunday, April 28, with a “Life Drawing” session held in the Art Center where students had the chance to draw a live model. Many students came to the session to socialize and experience live drawing of the human figure in a relaxed setting.

Many thanks go out to the faculty members who organized and ran Spring Arts Weekend this year, our art and poetry judges, and all of the talented students and families from SKS and other participating schools.