The Storm King School’s 2019 Arts Weekend kicked off last night with the screening of this year’s much-anticipated student film. Following a formal dinner in Henderson Dining Hall, the school community gathered in the Walter Reade Jr. Theatre for the premiere of Will Heaven Wait?–a short film which was conceived, written, produced, and edited by SKS’ video production students. The film portrays a father who has an unfortunate accident and faces death head-on before getting a second chance at life.  The cast features many SKS faculty members and students, including Mr. Hecht, Mr. and Mrs. Mendlewski, Emily Elizabeth Kent ’21, Conall Sweeney ’20, and Nina Gannon ’23 who starred in the film’s leading roles. 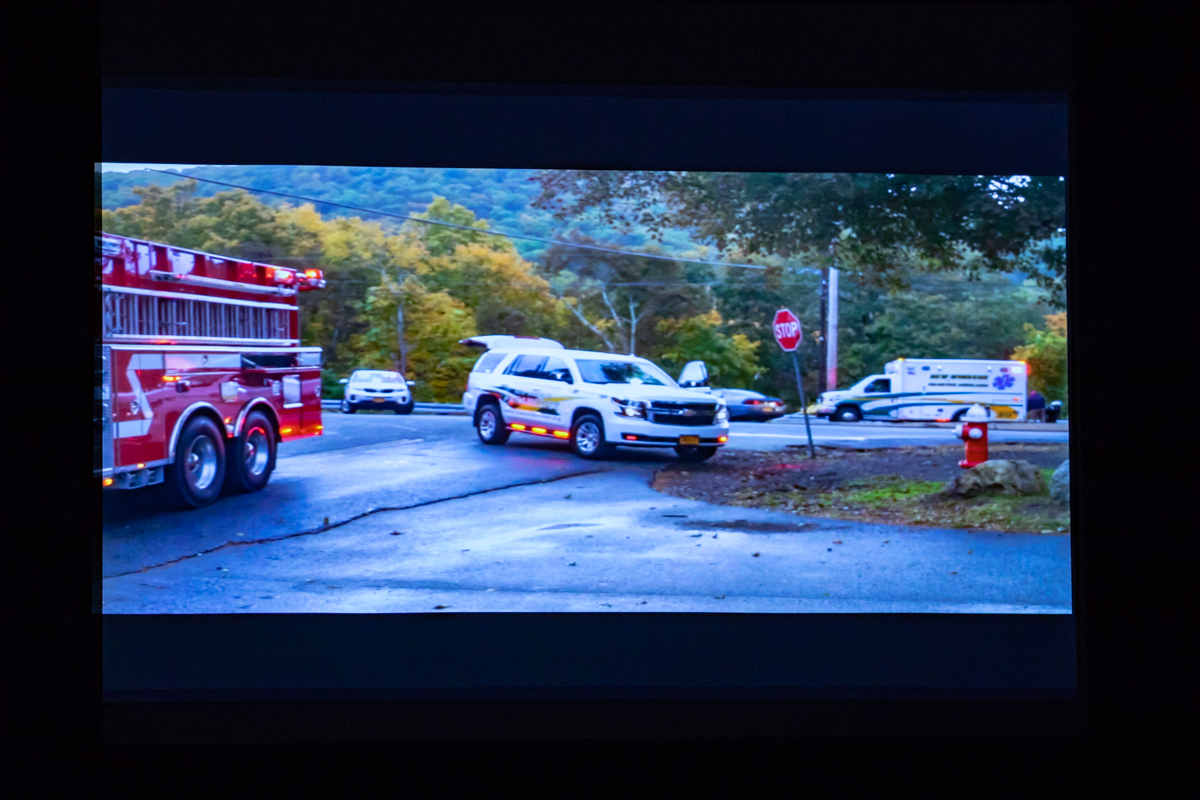 According to SKS’ Director of Video Production Zhenya Kiperman, his students worked hard on the film which took most of the school year to produce. “The students wrote the script in class during the fall semester, and later dedicated the film to Warren Beatty– an Oscar-winning actor who starred in the box office hit Heaven Can Wait in the late ‘70s. Our film is not a remake of Heaven Can Wait, but the two films have very similar themes,” he explained.

Footage for Will Heaven Wait? was shot during the fall semester, and the post-production continued throughout the year with editing headed by Maya Nazarkasimova ’19, Matthew Pelton ’19, and Catherine Zheng ’19 and audio effects led by Kylie Marshall ‘21. In addition, alumnus Timur Menadzhiev ’17 contributed to the visual effects. 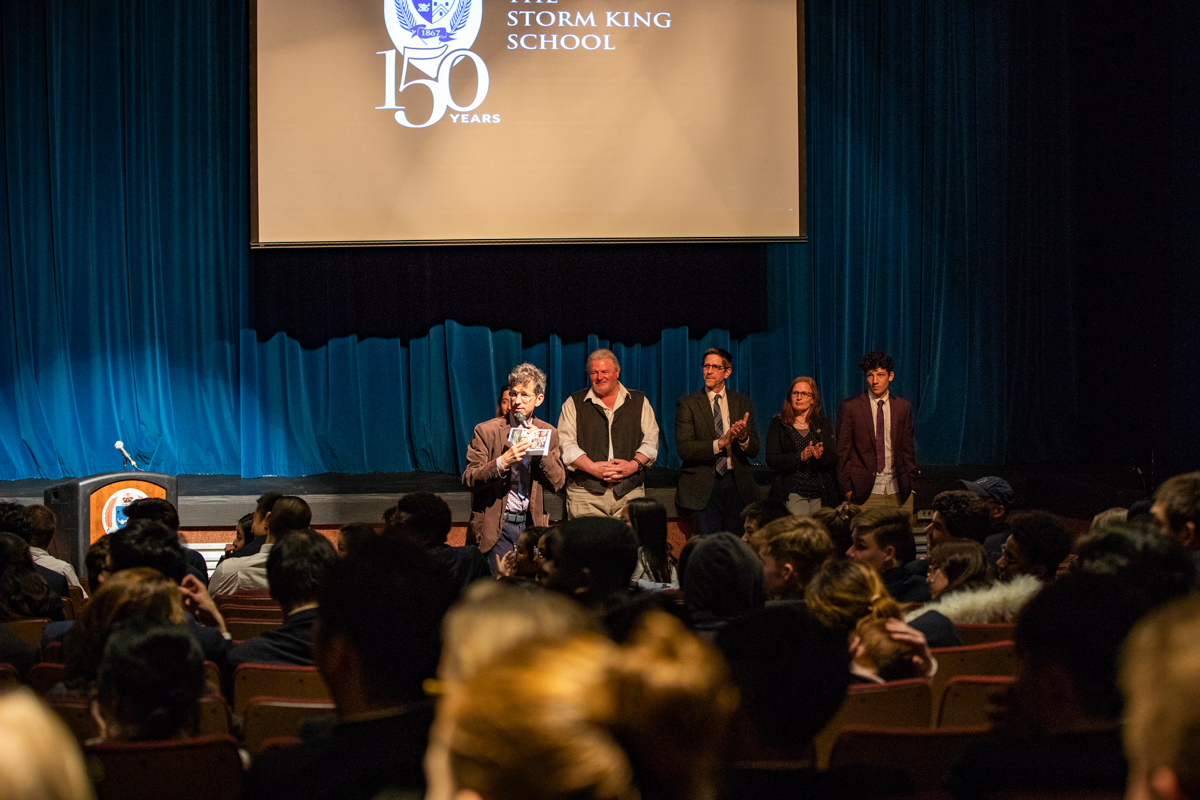 Immediately following the screening, the cast and crew gathered before the stage to discuss the meaning of the film and answer questions about the production with the audience. Mr. Kiperman also thanked the nursing staff from Orange County Community College who participated as cast members in the film and allowed SKS to shoot the hospital scenes at their facility.

The film screening is the first in a series of events scheduled during Storm King’s annual Spring Arts Weekend which is taking place on the SKS campus from April 25-28. Spring Arts Weekend is designed to celebrate the talents of our student-artists and poets who are interested in the visual, performing, and language arts. Arts Weekend continues on Friday, April 26, with the opening of the Student Art Show in Ogden Hall from 7-8 pm. Other Arts Weekend events include Storm King’s 3rd Annual Poetry Festival on Saturday, April 27, at 6 pm in the Theatre, and a life drawing session on Sunday, April 28, at 2 pm in the Art Center. All Arts Weekend events are open to members of the Storm King School community. 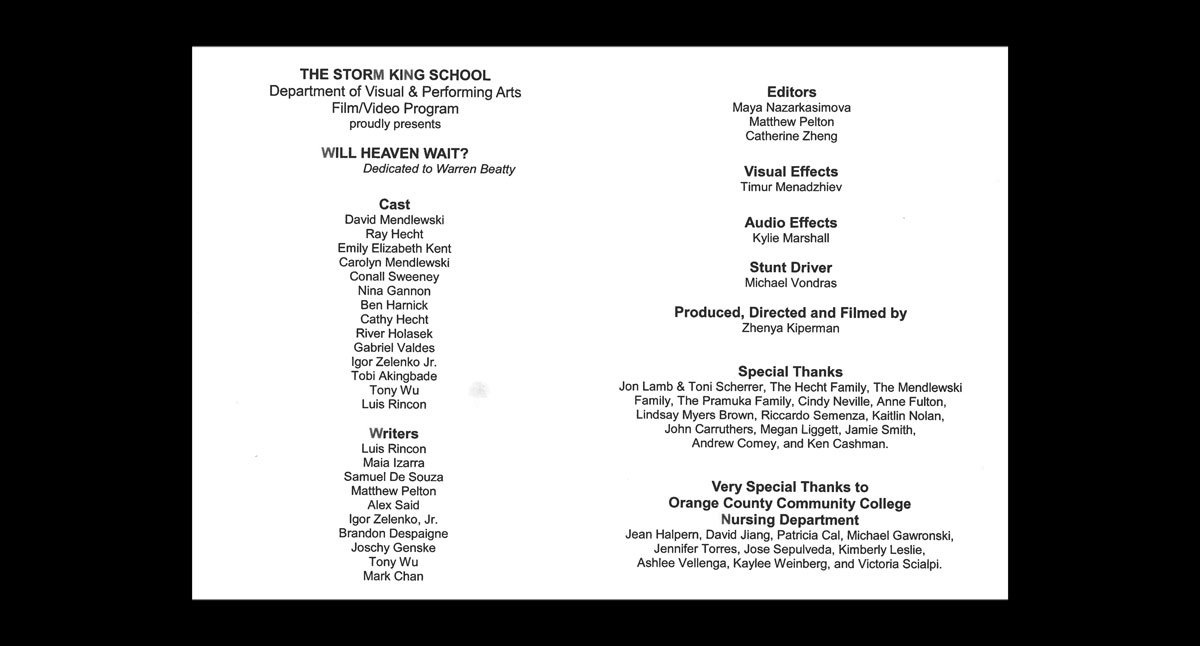