On Saturday, June 4, 2022, at 10:00 AM, The Storm King School held its 154th Commencement on the lawn in front of the Stephen P. Duggan Bell Tower for the School’s 51 graduating seniors. A speech given by Black Rock Forest Executive Director Dr. William Schuster highlighted this year’s ceremony as 22 young men and 29 young women from nine countries and two states were awarded their diplomas. Families and friends from all over the world were greeted with sunny weather as they gathered to watch this diverse and talented class transition to the next phase of their lives and become alumni of the School. 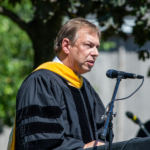 After 10 chimes of the bell and the sound of bagpipes, the processional of faculty led by Head of School Jonathan Lamb, Dean of Academics Dr. Tim Lance, Storm King School Board of Trustees First Vice Chair Robert Docherty ’72, and Dr. Schuster entered the venue followed by the smiling Class of 2022. True to Storm King tradition, students representing the nations making up the senior class greeted the audience in their native languages, followed by a moving rendition of “America the Beautiful” by the SKS Chorus.

After all were seated, Mr. Lamb welcomed the seniors and their families and reviewed the accomplishments of the graduating class: “The Class of 2022 applied to prestigious colleges and universities throughout the United States, as well as Canada, the UK, Hong Kong, Spain, and Australia. Business programs, international relations, foreign language, environmental sustainability, computer science, engineering, and science disciplines in preparation for medical school were top choices for programs of study. Seniors pursuing the arts at the college level were admitted to 22 different art schools and were offered over $250,000 in scholarships to pursue programs in filmmaking, stage management, visual arts, and fashion design. 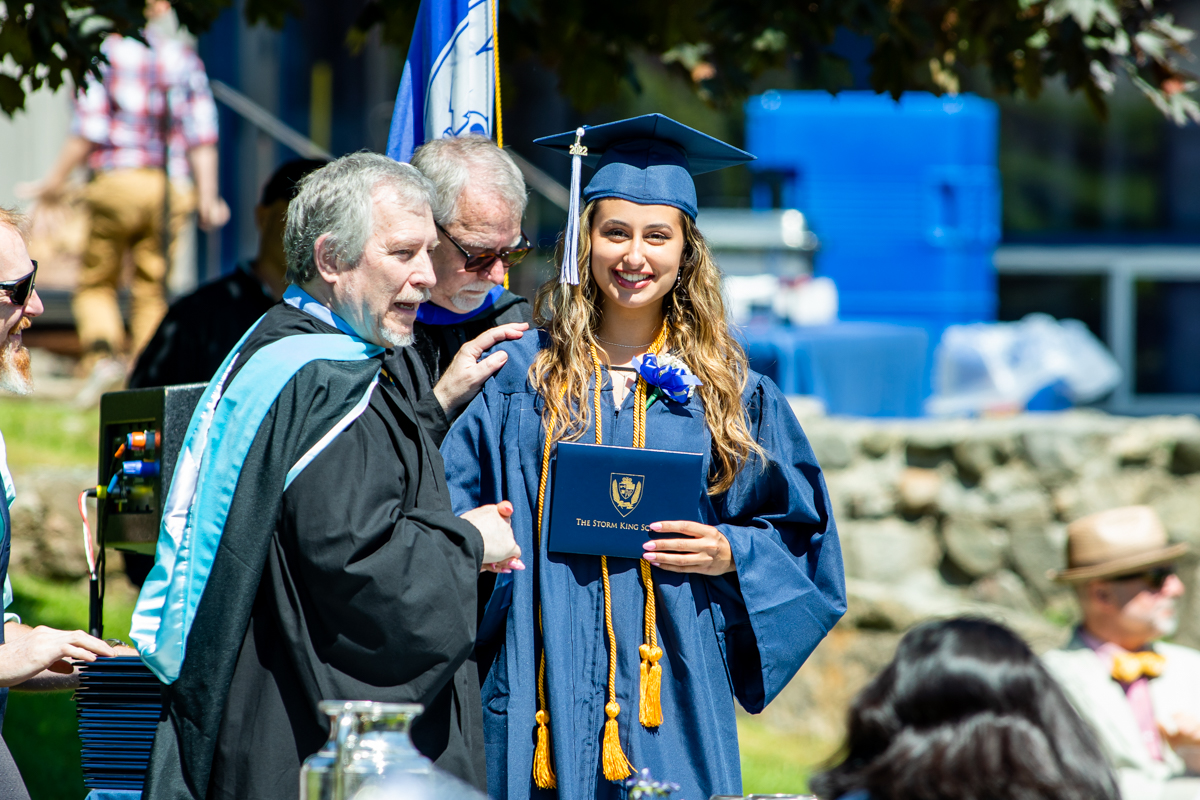 Beyond academics, the senior class has logged over 2,500 hours of community service, including almost 1000 in 2022 for local organizations including the Newburgh Armory, Hudson Highlands Nature Museum, Beautiful People Adaptive Sports, and others. Members of the senior class also helped SKS win 16 Hudson Valley Athletic Conference League Championships over their four years.  The girls volleyball team won the Class D NEPSAC Championship in 2020 and the boys basketball team advanced to the Class C semi-finals in 2019 and 2020 and was runner-up in the 2022 Class C tournament.  Several graduates have formally committed to joining collegiate sports teams while in college, two at the Division I level and five at the Division II level.” 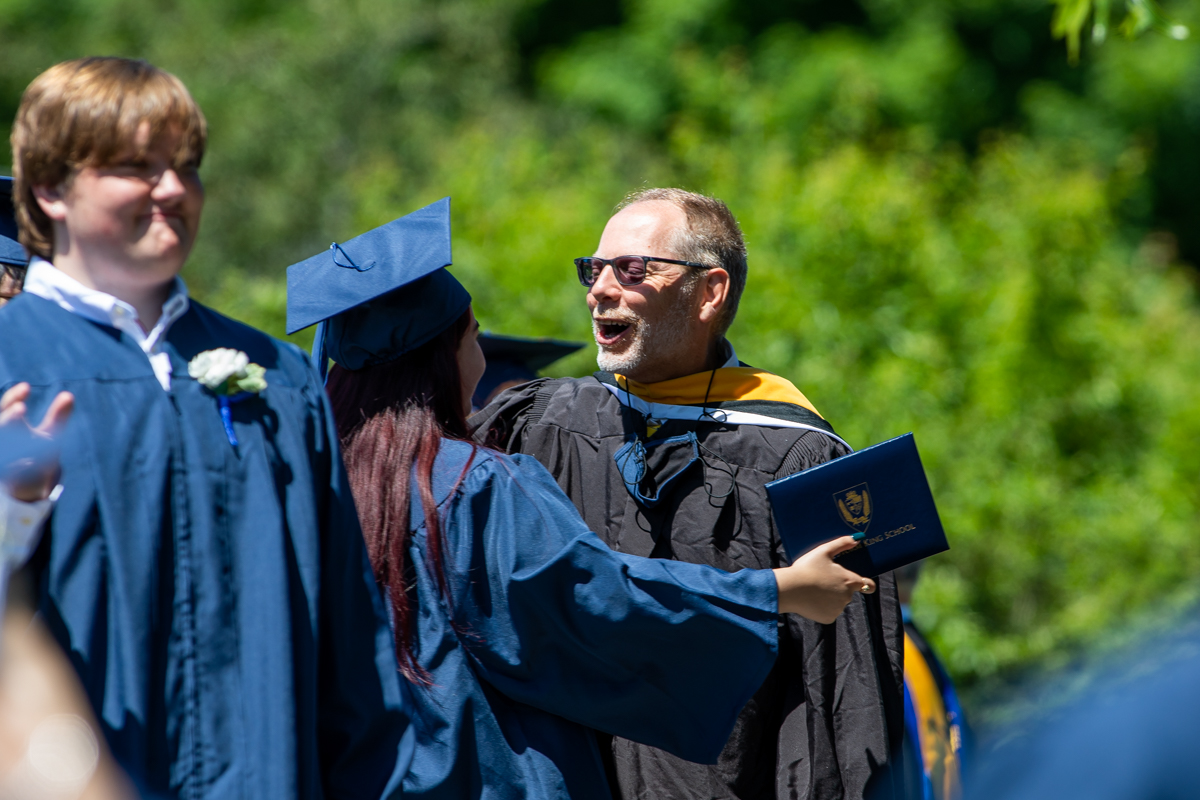 Following the next song “An Irish Blessing” performed by the Storm King Choir, Mr. Lamb introduced Storm King’s 154th commencement speaker, Dr. William Schuster, who encouraged the new graduates to embrace science, the natural world, and the preservation of our planet as they carve out their future paths: “This day is all about you- you stand on the edge of a great threshold in your lives, one that should be both acknowledged and celebrated.

As graduates of this wonderful school, about to go off into the world, the power to make positive change is now in your hands. You may be uncertain that you can make an impact, but history has shown repeatedly that you can. You may have heard the quote by the famous anthropologist Margaret Mead, who said: ‘Never doubt that a small group of thoughtful, committed citizens can change the world. Indeed, it is the only thing that ever has!’” 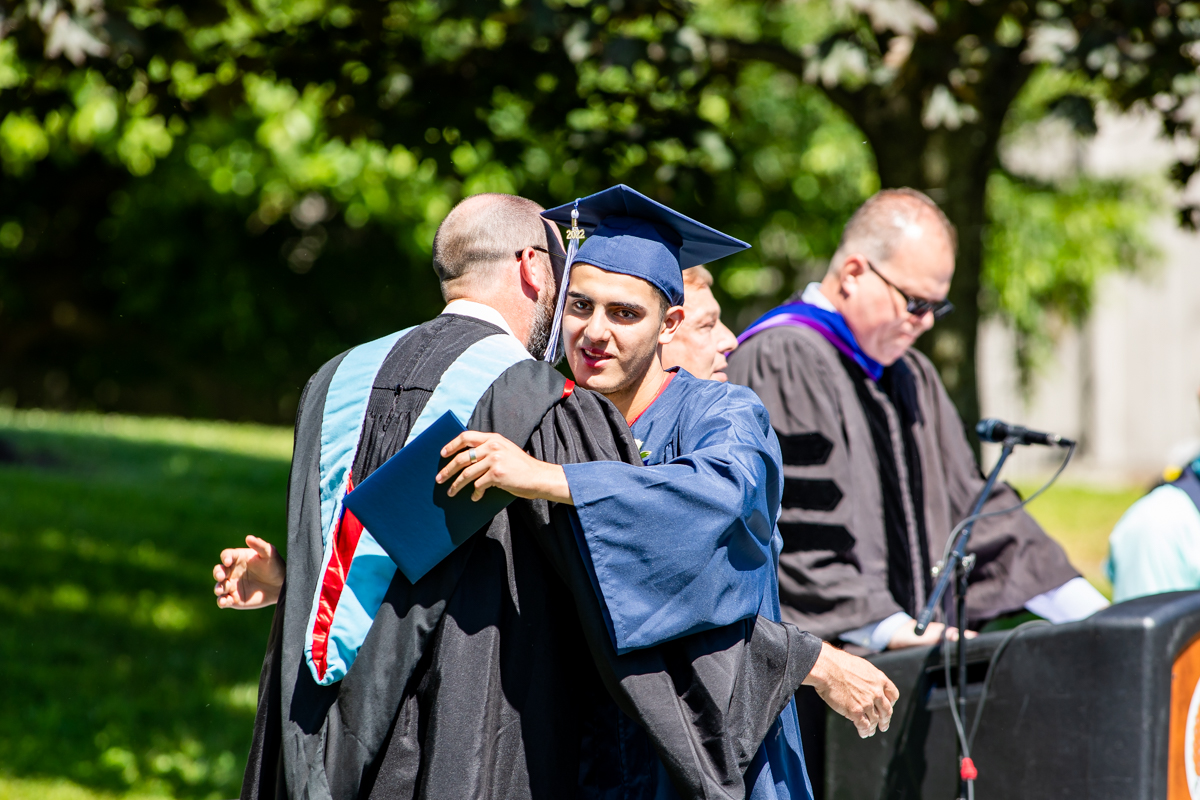 At the conclusion of Dr. Schuster’s speech, the Storm King Choir performed “For Good,” followed by the presentation of the 2022 Commencement Awards by Dr. Tim Lance. After the awards, Mr. Lamb asked the underclassman in the audience to stand for their official promotion to their next class year. To complete the ceremony, diplomas were presented to the senior class by Mr. Docherty, Mr. Lamb, Dr. Lance, and Dr. Schuster. As each new graduate exited the stage, the tassel on their cap was flipped from right to left, officially concluding their high school career and their life on the Mountain.

Emotions were high among the graduates as all rose to sing the Storm King Alma Mater before the processional exited the lawn to conclude the 154th commencement at The Storm King School. Following the ceremony, the graduates and their families gathered on the athletic field to toss their caps and mingle with faculty members to say their farewells. 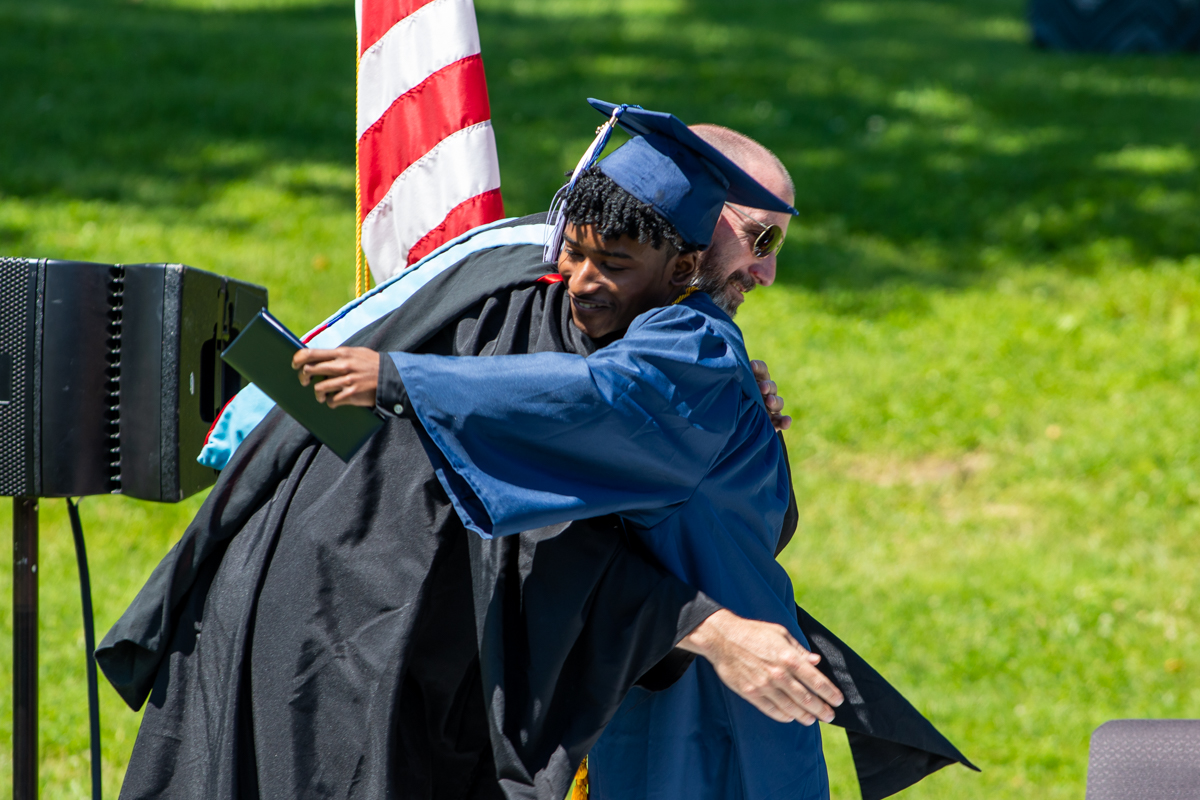 The Storm King Scholar Award is granted to those students who have consistently achieved at the highest academic levels and who have contributed significantly to other areas of campus life.

The Riley Cup is given in recognition of former Headmaster Philip Riley “to honor in perpetuity an outstanding member of the staff and an outstanding student who have contributed to the School’s community ethos in practical and creative ways.” 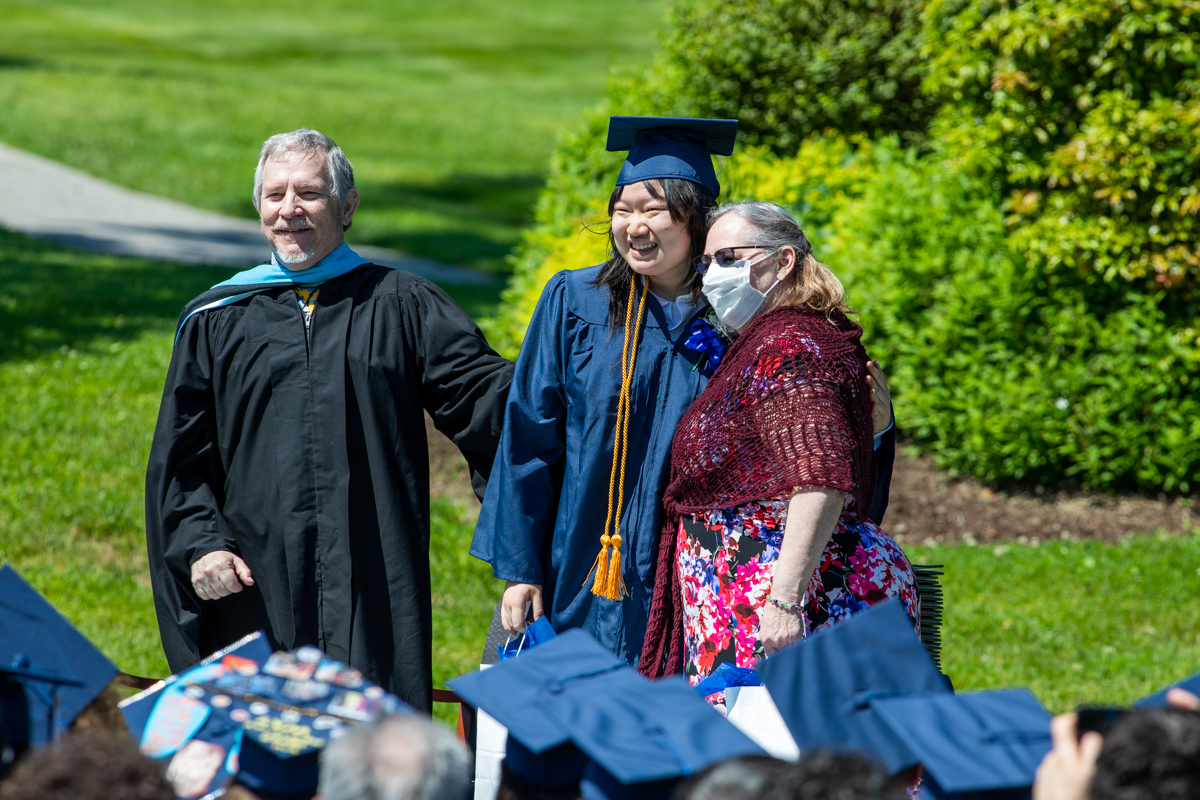 The Spy Rock Cup is awarded annually to that senior whose performance and contributions to our school have fostered its best interests and traditions. 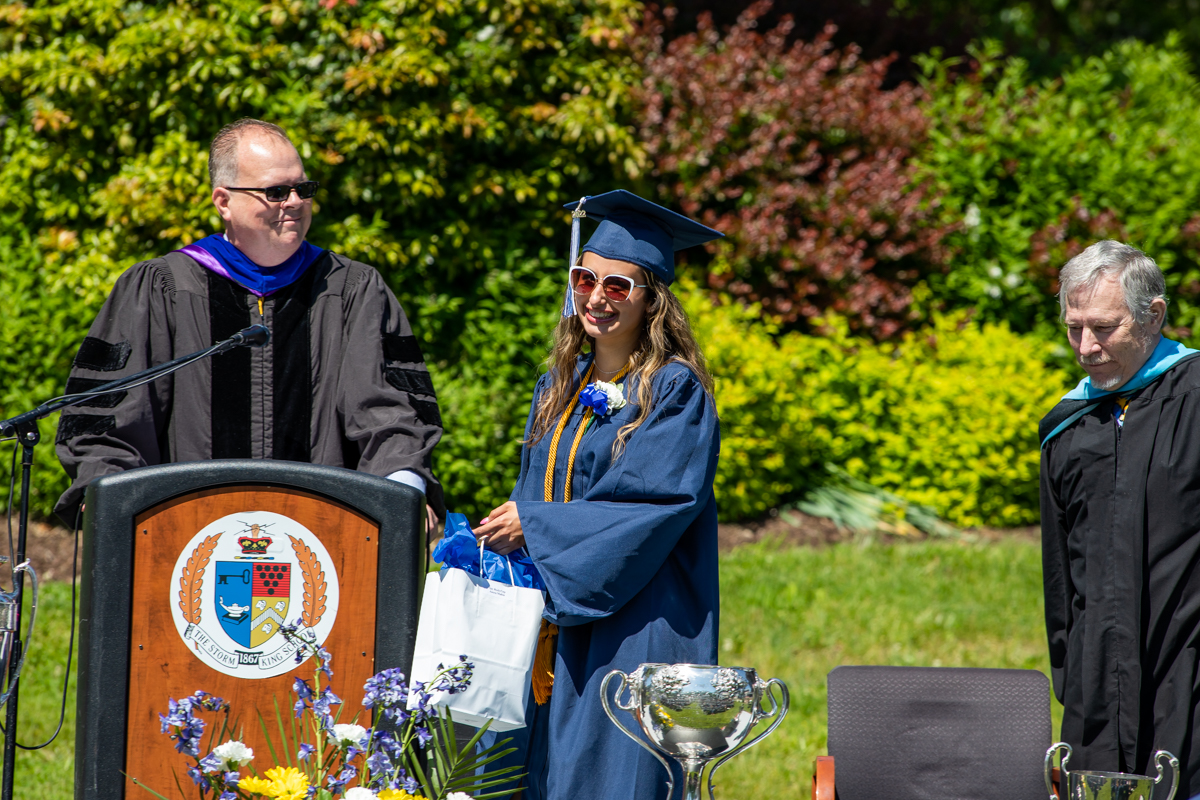 The Headmaster’s Cup is a gift of Mrs. Anson Barker, whose husband was the headmaster of The Storm King School for 19 years. Since 1938, the Headmaster’s Cup, inscribed “for cheerfulness of spirit and enthusiasm,” is annually awarded to that senior whose love for the School is profound. 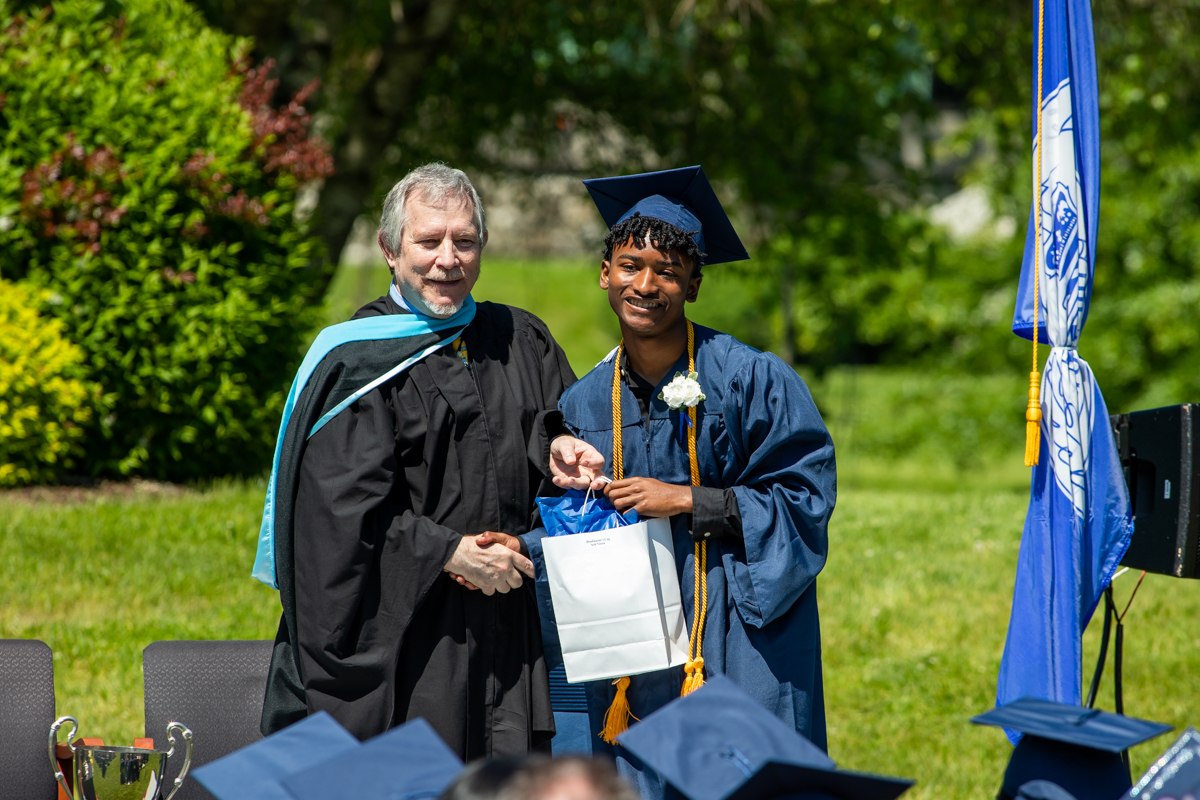 The Storm King Cup is the highest commencement award and an enduring tradition at the School whose recipient is chosen by a vote of the faculty, staff, and students. Since 1915 it has been won “by students who have distinguished themselves by their personal qualities and their accomplishments. What other positive traits they have manifested, they have shared the traits of idealism, quiet courage, and a vision of the School as it could be.” 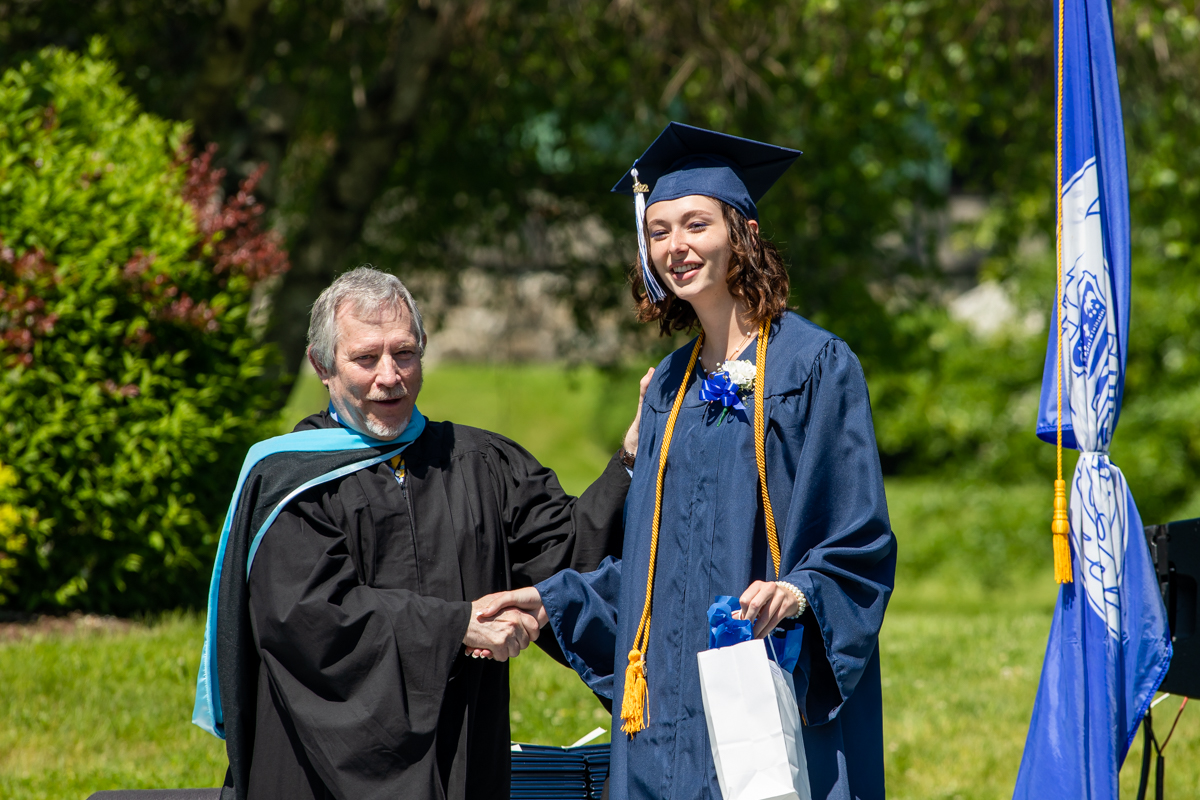